What up Muchachos. This week there are 7 new books out worth mentioning, which is a huge relief after all the big weeks we have been having. DC's Young Animal line has not been for me but it seems that some people are enjoying it. A little too strange for my tastes. Marvel continues to roll out it's Marvel NOW books, which hopefully will get better because the first couple of waves from NOW have been meh, and if you are to believe message boards and sales numbers of the local comic book stores, NOW is DOA. Hopefully Marvel will turn it around soon.  It isn't a matter of if, it is just a matter of when. DC and Marvel take turns at the top with Image cutting a nice little piece for themselves. So here we go with the new books. 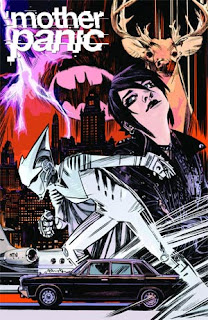 W: Jody Houser A: Tommy Lee Edwards
Mother Panic #1 - Meet Violet Paige, a celebutante with a bad attitude and a temper to match, who no one suspects of having anything lying beneath the surface of her outrageous exploits. But Violet isn't just another bored heiress in the upper echelons of Gotham City's elite. Motivated by her traumatic youth, Violet seeks to exact vengeance on her privileged peers as the terrifying new vigilante known only as Mother Panic.

As I have said before, these books are a little too out there for me. I will definitely give it a shot. The Young Animal books have all had intriguing previews. Maybe this will be the book to catch for me. 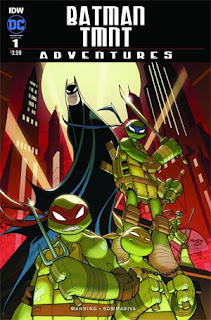 W: Matthew K. Manning A: Jon Sommariva
Batman Teenage Mutant Ninja Turtles Adventures #1 - When villains start to mysteriously escape Arkham, Batman seeks to track them down. What happens when he discovers that they have left Gotham completely, and entered the TMNT's New York City? The animated worlds of the current TMNT Nickelodeon cartoon and Batman: The Animated Series collide in this outstanding mini-series! The greatest all-ages crossover of all-time! Featuring villains and allies from both universes! The influential Batman: The Animated Series returns to comics!

Since the last Batman and Turtles crossover, I couldn't wait for more.  The last one was the greatest book that I didn't know I wanted. It seemed like an odd crossover that was a gimmick to sell more books.  However, it turned out to be a great story that I wanted more of.  Hopefully this crossover will continue along those lines and meet the high expectations that we have come to expect. 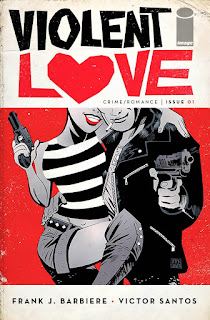 Double sized issue from Image, count me in.  The last double sized image book that comes to mind is Monstress, which has blown me away.  I am taking this as a Bonnie and Clyde type story that could have some potential. Based on the clothes I am thinking Lady Killer mixed with Fade Out, which were both great time pieces. 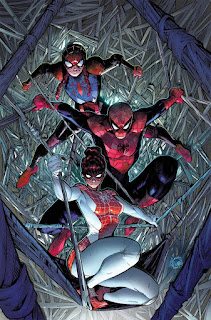 W: Gerry Conway A: Ryan Stegman
Amazing Spider-Man Renew Your Vows #1 - The Parker family is web-slinging and wall-crawling their way into your hearts and into comic shops later this year! Life is good for Peter Parker and Mary Jane; their daughter Annie is their pride and joy, they're both working and (barely) making ends meet, they're keeping the streets of New York City safe from super villains, you know, normal family stuff. Oh, did we mention MJ and Annie have Spider-Powers... just like Peter?! Being Spider-Man just became a family affair.

This seems like a no brainer if you are a Spider-Man fan.  It seems like a lot of people have been waiting for this book.  The expectations are high and Conway better bring it. Now that X-Men have been ruined and banished to the corner of the Marvel Universe Spider-Man has taken their spot as my top interest in Marvel. 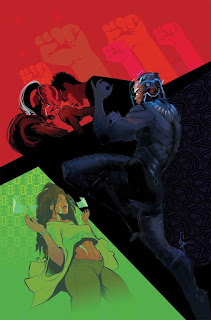 W: Ta-Nehisi Coates W: Alitha Martinez - Afua Richardson
Black Panther World Of Wakanda #1 - 'YOU DESERVED SO MUCH MORE, LITTLE FLOWER. YOU DESERVED A WAKANDA THAT CHERISHED YOU.' Writer ROXANE GAY (Bad Feminst, Hunger) spins a Wakandan love story, its tenderness matched only by its brutality. You know them now as The Midnight Angels, but in this story they are just Ayo and Aneka, young women recruited to become Dora Milaje, an elite task force trained to protect the crown at all costs. What happens when your nation needs your hearts and minds, but you already gave them to each other? Illustrated by industry veteran ALITHA E. MARTINEZ (Iron Man, Black Panther). And in a special backup story, acclaimed poet YONA HARVEY (Hemming the Water) explores the true origins of The People's mysterious leader Zenzi. Black Panther thinks he knows who Zenzi is and how she got her powers, but he only knows part of the story, Illustrated by rising star AFUA RICHARDSON (Genius).

I have always liked the Black Panther and am hoping that this is an expanding view of Wakanda and Black Panther. It seems odd that they are pitching this as a love story, but sounds like it has potential. 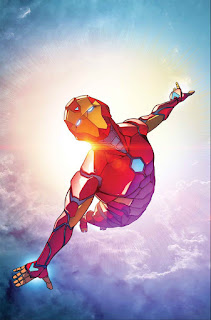 W: Brian Michael Bendis A: Stefano Caselli
Invincible Iron Man #1 - From the violent streets of Chicago, a new armored hero rises! Clad in her very own Iron Man armor, Riri Williams is ready to show the Marvel Universe what she can do as the self-made hero of tomorrow. But is she ready for all the problems that come with stepping into Iron Man's jet boots? Where's a genius billionaire playboy philanthropist when you need one?

Everyone seems to have an opinion on this new Iron Man and it seems to be split between love and hate, at least online it does.  In the stores people seem to be very meh about this new character and her taking over as Iron Man.  I fall into the meh category. Wallet wise, it makes it a lot easier to cut as my pull list is over flowing with books right now. I have no attachment to this character and have more than enough to read so it is an easy cut. 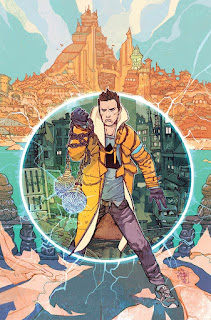 W: Steve Orlando A: Jakub Rebelka
Namesake #1 - Steve Orlando (Midnighter, Virgil) brings us his only original series of 2016, a gripping story about the nature of identity. Once every seven years, Earth overlaps with Ektae, a world where alchemy is not pseudo-science but the driving force of industry. For seven days, Ektae breaches our world, bringing dirty magic and ideas. Jordan Molossus was born of Earth and Ektae and abandoned by both, but when he receives two cast iron urns containing his estranged fathers' ashes, he'll leave everything behind to put his parents to rest before Ektae disappears for another seven years.

The concept of Alchemy has always fascinated me, ever since Full Metal Alchemist and Alchemist the rapper. The fact that this overlaps with Earth and non alchemic people every seven years is a nice twist and has potential.

Think I missed something.  Let me know in the comments.

Email ThisBlogThis!Share to TwitterShare to FacebookShare to Pinterest
Labels: New No. 1's